I have just been reading Paul Chek’s latest weekly blog and he had some photos of him adding to one of his magnificent rock stacks.

Rock stacking is exactly that, stacking rocks of varying shapes and sizes on top of each other. It takes much patience, much practice and much concentration. Although it can be a workout, it is very much a practice of meditation by working with each rock helping it find it’s place of balance.

Paul said something that caught my attention.

‘Then, I had to find stones that would work for the situation I needed them for, and then get them very well balanced; any mistake below is magnified with each successive stone you add above it, and it’s not an exponential formula, it’s a radical formula.’

You can read Paul’s blog here.

The same applies with health and fitness.

We can easily forget the basics to concentrate on the big picture, or the shiny attractive thing. For some that can mean that they enjoy staying up a little later a few nights a week while they are engrossed in a tv series. Something that is out of the ordinary that they wouldn’t normally do. Until the repercussions of a few later than normal nights becomes a habit and then affects your ability to get out of bed in the morning. 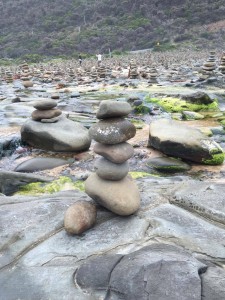 It starts a snowball effect.

In the gym you might be advanced and able to do most movements without much discomfort. So much so that you push yourself to do more, lift heavier and to do movements that are extremely advanced.

Both of these scenarios are fine provided you have the basics in place to support your actions.

You get back into the habit of going to bed at your pre-tv series time once the series has finished. And that you practice the advanced movements in the gym but also program days where you go back to the basics and reassess the movements that allow you to be able to complete the bigger tasks.

It’s really important with health and fitness to make sure you have the basic foundations in place so that, just like the rock stack, you have a strong and steady foundation by which to build upon.

So that when your rock stack starts to fall down, you know what balance of which elements you need to build it back up again.

See you in the gym

Reach all your health and fitness goals.

Get my $39 value
free ebook now

Continue without
your free $39 e-book

Enter your info below so we can send you...